One is on a path to become a doctor. The other, a veterinarian. And their brother recently enlisted in the United States Army.

These three siblings have bright futures ahead, and it all began at Next Door.

“I do remember playing on the playground and having fun with my friends and having nice teachers and people being friendly,” Mariah said.

Mariah is the oldest of her siblings, Mykiara and Michael. All three attended Next Door as Head Start students, starting in the mid-1990’s.

“The teachers, they cared about teaching, they really wanted to make sure that every child was able to get taught what they needed to go to the next level,” Mykiara said.

At the time, the children lived in the neighborhood, just a few blocks from Next Door’s 29th Street campus. Their mother, Kenya, also joined the Next Door family, first as a parent volunteer and later as teacher. Today, Kenya is a Head Start Site Director at 29th Street. Her children have advanced well, too.

Mariah is a graduate of the University of Wisconsin–Madison where she studied political science and international studies, and spent a semester abroad in London. After graduation, she joined AmeriCorps and served in Milwaukee Public Schools and with the Boys & Girls Club of Greater Milwaukee. Just last month, Mariah returned to England to pursue a master’s degree in public health at New Castle University. It’s the first step toward a career as a doctor, a longtime goal for this Next Door alumni.

“Ever since I was young, I always wanted to serve people and help people, and so I feel like being a doctor, I get to serve the community that I live in but then also I get to teach people,” Mariah said.

This fall, Mykiara started her junior year at University of Wisconsin-Milwaukee. The 20-year-old is studying biology as a stepping stone to become a veterinarian. She says a career with animals is something she has longed for since she was a kid. During high school, Mykiara volunteered with the Wisconsin Humane Society, walking and feeding the dogs. She looks forward to the challenges of professionally caring for animals down the road.

“I think it’s interesting because they can’t really speak to you and tell you what’s wrong, so you have to actually learn and try to figure out what is going on,” Mykiara said. 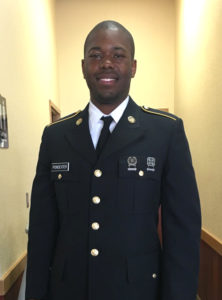 From Next Door, Michael followed his older sisters to Clarke Street Elementary School and Samuel Morse Middle School for the Gifted and Talented in Milwaukee Public Schools. He graduated from Riverside University High School in 2015 and is currently a Private in the United States Army based in Fort Hood, Texas. Michael spends his days in physical training and as a cook. His goal is to use this military experience as a stepping stone to college. He hopes to one day run his own sports bar/restaurant while keeping up with hobbies, like drawing, sculpting and writing hip-hop music.

“I want to major in business with a minor in visual arts and music production,” Michael said.

Despite their years away from Next Door, Mariah, Mykiara and Michael still maintain ties to the organization. They have come back over the years to volunteer at events, like the K5 graduation and Walk for Children. They enjoy the chance to stay connected to a place where they began their education and see the next generation of Next Door.

“You see they don’t just go to school to play, they go to school to actually learn things and they do learn them and they can show you what they’ve learned, so I think that’s like the best thing about going back and volunteering,” Mariah said.