menu
Learn More About: About Us

Serving Milwaukee since 1969
A gathering of Next Door children from our early days. Check out the timeline below to learn about our history and recent growth. 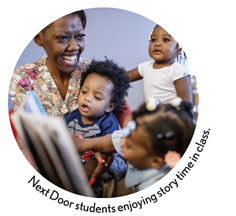 2019 – Next Door celebrates 50 years! The agency currently serves more than 1,400 children from birth to five years old through center- and home-based programs and 11 partnership sites. For more information about our 50th Anniversary celebration, click HERE.

2014 – Next Door opens its Capitol Drive campus. The expansion allows Next Door to serve an additional 440 children. 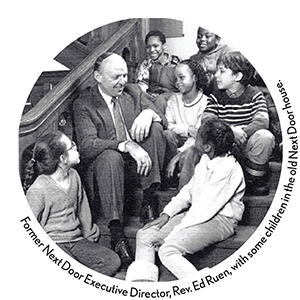 2010 – Next Door receives a state designation as a Head Start Center of Excellence.

2005 – Educare opens at Next Door — the third Educare school in the country — bringing its best practice early childhood education model to Milwaukee.

2003 – Next Door’s programming receives the highest rating granted by the Office of Head Start.

1992 – Next Door moves into its new home in the former Helwig Carbon Products factory building along North 29th Street. The company gifted the building to Next Door.

1990 – Next Door’s Books for Kids program begins thanks to founder, Mary Kellner. The program collects new and gently-used donated books from the community and distributes them for free to Next Door students to help them build their home libraries. 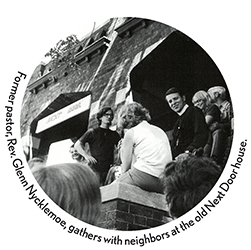 1974 – The Genesis outpatient alcohol and drug treatment program opens with personal and group counseling services, along with employment and housing assistance, adult education and medical treatment.

The Milwaukee Urban Semester program expands to include St. Olaf College and Carthage College students spending a semester in an urban studies program based at Next Door.

1971 – The program incorporates as a nonprofit organization in the State of Wisconsin – Next Door Foundation.

1969 – Our Savior’s Lutheran Church opens a youth and young adult outreach center located next door to the church. Initial programming includes a drop-in center for teens providing a safe and supportive place to congregate.