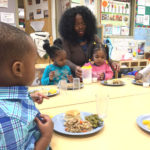 The station’s coverage highlights a national research study released in February of this year, which tracked student progress in four Educare schools, including the one in Milwaukee. The study showed after one year of enrollment, at approximately age 2, the Educare students showed significantly higher English language skills, fewer parent reports of problem behaviors and more positive parent-child interactions compared to a group of students who did not attend Educare. The researchers include a team from the University of Wisconsin-Milwaukee, and they plan to continue tracking the children through age five.

The WUWM report features interviews with Dr. Nancy File, an early childhood professor at UWM, and an Educare teacher and parent. The coverage included an extended interview with Dr. File on the station’s popular Lake Effect show, as well as a news report on its morning drive program.

Click on the link here to listen to both segments.