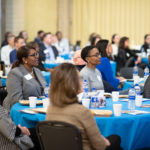 Next Door launched its 50th Anniversary Campaign this year by returning to the place where the organization began in 1969.

We hosted a President’s Breakfast program at Our Savior’s Lutheran Church in Milwaukee on January 25, 2019. During its first two decades, Next Door operated as a youth and young adult outreach program in a church parsonage next door to Our Savior’s. Our guests at the breakfast included Our Savior’s parishioners who were around during Next Door’s early days, like Doreen Festge and Katie Ruen in the picture below.

The anniversary celebration featured a look back at the founding of Next Door, an overview of our latest Report to the Community and remarks from two of the Literacy Lab’s Leading Men Fellows working in Next Door classrooms this year. The BizTimes featured this event in its Around Town section. Click here to view the coverage.