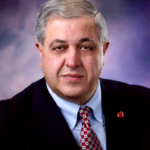 Frank Habib arrived at Our Savior’s Lutheran Church in Milwaukee in 1970 to serve a newly-expanded youth and young adult outreach program.

He was 21 years old and a VISTA (Volunteer In Service to America) volunteer. During his service, the church’s outreach program incorporated as Next Door and Frank decided to join the organization as a full time program director until 1980.

“It was very much an environment of peace,” Frank recalls of Next Door. “There was a whole sense when you walked into Next Door that you were in a whole different world. You could leave the outside world outside.”

Frank said that kind of escape was desperately needed for the youth and young adults in the near west-side neighborhood.

“Almost every kid that came to Next Door came from a stressed situation at home – single parent family, broken families, foster kids, one parent in prison maybe. Their reality on a daily basis was survival, how to get through today to tomorrow,” Frank said.

Next Door – located in church parsonage next to Our Savior’s — helped out in many ways. As part of his role, Frank ran a drop-in center in the evenings for teens and young adults to hang out in a safe and supportive space.

“It was two and a half hours of them off the street in a very positive environment where we could relate to these kids and talk to them and learn more about them,” Frank said.

Frank also ran a summer work program at Next Door, offering both neighborhood jobs and classroom instruction on job applications. He said Next Door even developed state-recognized, curriculum programs on topics, like drug prevention, to present at area high schools.

“We did some things that people said couldn’t be done,” Frank said. “Some people would say, ‘You’re only going to be here a couple of years,’ and by sheer stubbornness we said, ‘No, we’re going to be here forever.”’

After his decade of service to Next Door, Frank went on to a successful career in Development at places including St. John’s Northwestern Military Academy and Milwaukee School of Engineering.

Over the years, Frank has reconnected with Next Door through a few small world encounters with former program participants – one at MSOE and the other at Miller Park during a baseball game. Frank still treasures those relationships and those with colleagues he worked so closely and passionately with at Next Door.

“I feel very fortunate to have been involved with Next Door,” Frank said. “I had some great mentors there and made some life-long friends and contacts,” Frank said.