A new post as pastor of Our Savior’s Lutheran Church brought Rev. Ed Ruen from New York City to Milwaukee in 1975. The church was home to Next Door where Ed took on his next leadership role as Executive Director for more than a decade.

“Next Door offered me an opportunity to live out my passion for the city, especially the children and youth who need our support and love,” Ed said.

Ed spent 15 years leading Next Door. One of his big challenges early on was building a financially-sustaining organization that could serve the community for years to come.

“We set up a Development program modeled on a much larger institution,” Ed recalled. “It included public relations, planned giving, corporate giving, church giving, individual giving and Byron Tweeten as a consultant.” Byron was Next Door’s first executive director who went onto a career in fundraising for non-profits.

“Through the work of Don Mundt, Charlie McNeer of Wisconsin Electric, Rich Teerlink of Harley-Davidson and Hope Anderson of the Walter Schraeder Foundation, we had the top-tier of Milwaukee’s corporate and foundation leadership involved in Next Door,” Ed said. 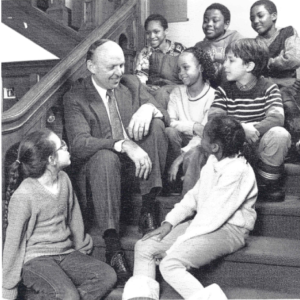 Along with donors, Ed remembers “a host of volunteers who backed us up all the way year in and year out” and “a strong, dynamic board” willing to try new things. One of those things was the Hope Apartments Project in late 1980’s. Community philanthropist, Marty Stein, gifted the four apartment buildings to Next Door at 27th and State Street. Next Door then recruited churches and businesses to adopt apartments to fix up for rent.

“It was the largest volunteer project in the city before Habitat for Humanity,” Ed said.

Back at Next Door, programming during Ed’s tenure included basketball and tutoring for teens, GED classes, a drug and alcohol treatment center called Genesis and the city’s first home-based early childhood program for neighborhood families.

Ed was also around for the agency’s move to the Helwig building on 29th Street and the creation of both Books for Kids and the Walk for Children. Looking back on his 15-year journey with Next Door, Ed is most appreciative of the people he met along the way.

“We were a family in mission in the city and thankful for the opportunity to serve the children, youth and families of Milwaukee,” Ed said.

As for Next Door’s 50th Anniversary in 2019, Ed says he’s thrilled to see how far the agency has come.

“It is truly impressive to see what Next Door is today with the caring, committed staff, the quality programs and the many volunteers, some from my days who continue to give their time and money. And of course the beautiful children! Next Door is alive and well!”